A lot had happened in the last weeks. Lots of tests, especially on 64 bit architectures and interaction between 64 bit client and 32 bit server. Some bugs were fixed in the RSA implementation (server and client). New XSLT library was introduced in framework based on libxslt2, as an alternative to Sablotron. New random functions were introduced.

Bugs fixed:
On Win32:
On Mac OS X:
On all operating systems:
As a new feature in Concept Client 2.0.118, a history database was introduced: 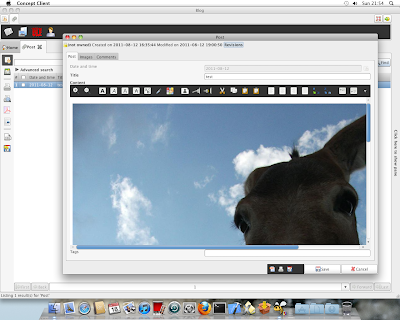 You can enable "Edit without locking" in GyroGears allowing two or more users to edit simultaneously the same entity. Only the changed fields will be updated in the database.
If refresh in real time is checked, when another user will view an object modified by another user, it will me notified that the object is changed.

In the screen below you can see the two options. 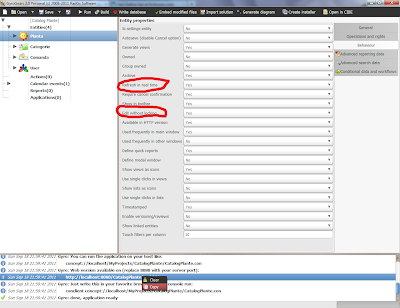 Also, a popup menu is available in status window, enabling you to copy the text (useful when generating traditional web 2.0 applications, to copy the http address).

GyroGears applications now fully remember the context after exiting and reopening the applications. It will automatically reopen all the tabs opened at closing time. Now it correctly the size and positions for all the windows (was broken at some time, due to new GTK version).

The main feature added, was the property request caching in GyroGears forms. Now, the server makes a bulk request for all the needed properties when reading a form, and receives all the messages in a single block, minimizing the network traffic.

When updating records, now will NOT cause the reload of the view, minimizing the database server traffic. The update will be done in-place on the screen. Same for delete operations and archiving operations. This lowered the database and provided the user with a better feel (all looks to be executed very fast, while update operations are run in background).

Suggestions were introduced when searching in GyroGears applications (both http:// and concept://).

GyroGears is OUT of BETA, and is to be considered stable (enough) for production usage.

Remember that it can do websites and web applications now!
by Eduard Suica at 9:25 PM