After implementing 2 mobile clients, one based on MoSync and another one based on Marmalade, I've decided to implement using "the native way". I've made the Concept Client 2.0 for Android devices using only Android SDK and NDK (the socket layer).

After looking into MoSync, I can say that is a nice platform but with a big drawback: the sockets. They implement AsyncSocket and it is a good idea, however, this cannot be a solution for every situation. Just think at a VoIP application.

On the other hand, Marmalade has better sockets and low level APIs, and is significantly faster. However the support is almost zero (Maybe for enterprise licenses is different). Also, the native user interface (IwNUI) it lacks lots of functionality. Audio API's are almost impossible to use, at least if we're talking about streaming (you cannot use locks in audio callbacks).

Now, Android SDK and NDK is straight forward. I've ported the client in about 7 days, which is fine. Next to come is iOS. 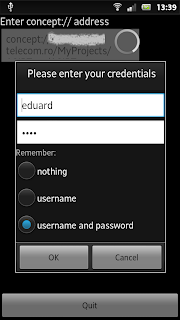 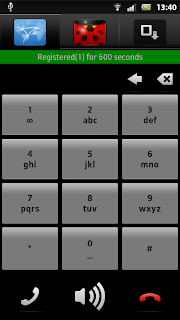 This is from a VoIP application that I'm working on - entirely Concept Application Server - based.