I've spent nearly 80 hours talking with GyroGears users (both programmers and non-programmers). A year ago the support for smarty-like templates was dropped in favor of XSLT. Then I used Sablotron but switched later to libxslt2 (easier to install). Now, the developers asked me about the possibility of calling Concept functions from XSLT, and I've said no. Not because is not possible, but because I consider it bad practice. However I've been asked about this so many times that I've decided to implement it. I've made a very simple interface - just one function that registers all members of a class:

So, you can just call XSLTRegister(this) and you will be able to call from the XSLT every function.

Also, Gyro now generates interfaces functions for XSLT. You could call something like:

The third one - a flag for linking an object list to every HTTP script (for example an entity called "Menu" with this flag set to true will cause the menu items to be linked to every script. 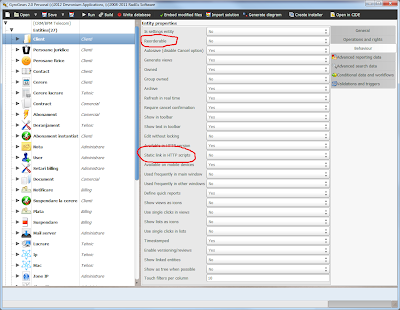 As usual lots of bugs fixed. One was linked with the usage of filters on relation fields.
by Eduard Suica at 9:01 PM